The organization for which I am working is AerospaceResearch.net. It has many interesting projects not only for the under-graduate beginners but for the masters‘ degree students too. We are a small group of enthusiasts who love to solve problems related to space. The benefit of being a part of a small group is that you get to know each other in a very short duration of time. We have regular meetings with our project mentors. The best part is that we can contact our mentors anytime. My mentor is Nilesh Chaturvedi who has guided me throughout the project and is still doing so. Alexandros Kazantzidis is also one of the mentors in the organization who cleared my doubts while building the propagation model.
Link to the organization repo.

The title of the project is Implementing Two-Line Element (TLE) Input / Output and using it for evaluation.

Two-Line Element (TLE) is a data format or a way of encoding various parameters of an object orbiting Earth at any particular time point, an epoch. TLEs can describe the trajectories only of Earth-orbiting objects. It is widely used as an input for projecting the future orbital tracks of space objects. A TLE set may include a title line preceding the element data, so each listing may take up three lines in the file. The title is not required, as each data line includes a unique object identifier code. The two lines contain a lot of information about the object and have a length of 69 characters each.

The scripts that were added to the module are database initialization, scraper, parser, Gibb’s method, and propagation model. More details about each element are as follows:

Database contributes a major role in testing and generating the result of a module. In the beginning, we did not have TLE data. So, we decided that we will store TLEs from the celestrak website in the database. Now, it is time to choose which database we are going to use: SQL or NoSQL? Both the databases have their own advantages and disadvantages. After taking care of the needs and the data which we are going to store, we chose SQL based data. The reason behind this choice is that the input is well defined and structured. We only want to store 2 strings (that is, line 1 and line 2 of the TLE) at a particular time epoch. MySQL is used to store the data. The format of the data stored in the database is – timestamp, line 1 of TLE, line 2 of TLE.

The flowchart of the script is as follows, 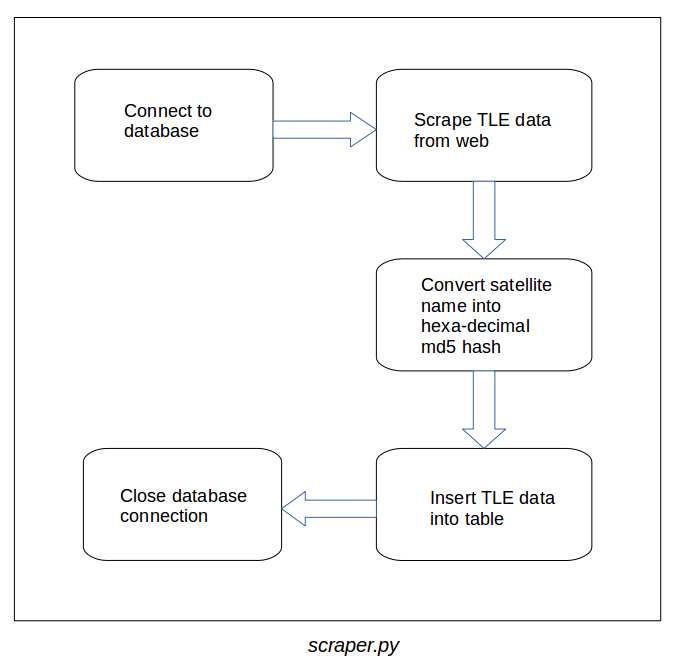 * Format of the table is given above

Currently, the database module is shifted from the organization repository to my own repository (which contains all the codes created during the GSoC) on github as it is producing a build error during the build process. In this build process (which was running on github), the script is creating a connection with the locally stored MySQL database which is then creating an error in it. The database module will be added later using some online database.

The database module can be found here.

Gibb’s method is based on the fact that two body orbits lie in a plane. It takes three position vectors as its input arguments and generates a pair of position vector and velocity vector, together known as the state vector. The Gibbs method is implemented using the OOP concepts and hence it supports the data abstraction and encapsulation. The method includes a lot of mathematical computation.

The input to the script is in the following format,

A pseudo-code and a brief explanation of the script is as follows,

A brief explanation of the script

The script contains a function which converts the state vectors into Orbital or Keplerian elements namely semi-major axis, inclination, right ascension of the ascending node, eccentricity, argument of perigee, and mean anomaly which can thus help further in tracking and plotting satellite’s orbit and in a lot of other computation.

Pseudo code for converting state vector into orbital elements is as follows:

Simplified perturbations models are a set of five mathematical models (SGP, SGP4, SDP4, SGP8 and SDP8) used to calculate orbital state vectors of satellites and space debris relative to the Earth-centered inertial coordinate system. This set of models is often referred to collectively as SGP4 due to the frequency of use of that model particularly with two-line element sets produced by NORAD and NASA.

A brief explanation of the script

The code is taking TLE as input. Then it extracts the necessary elements in compute_necessary_tle() from the TLE which helps in the computation of the SGP4. The necessary information includes inclination, right ascension of the ascending node, eccentricity, argument of perigee, mean anomaly, mean motion, and bstar drag term. After that, the propagation model is exected which include a lot of heavy mathematical computation. After the computation gets over, the function return state vector as output.

Now to check whether the code is producing the results correctly, we need to convert the resulted state vector into TLE back. So, one more function is added which recovers the TLE back from state vectors. To validate the result, Spacetrack Report 3 is used which contains a sample TLE to find the state vector at a particular epoch. The propagation model is taking two input arguments t1 (start epoch time) and t2 (stop epoch time). The resulting state vector is computed in the given range [t1, t2] (including both the points). As there is a state vector at every epoch so an output vector is created which stores all the state vectors and returns it as a result.

So, just remember to call the functions in the correct sequence and you are good to go.

A test file for propagation model is also written which verifies the output of the two functions propagation_model() and recover_tle().