The NASA Space Application Challenge 2015: one hackathon weekend, 133 cities around the world, 949 projects, and our BigWhoop project is among the final 15 for the global People’s Choice Award. Read on to learn what happened during the event at the Stuttgart hackerspace shackspace and then go on and vote for BigWhoop and make it win the award!

NASA’s Space Apps Challenge is an international mass collaboration/hackathon organized on a global scale and held in all major cities worldwide, with a focus on finding solutions to challenges faced in space exploration and also to life on Earth.

The Winner of the Stuttgart chapter of Global NASA Space Apps Challenge is BigWhoop. BigWhoop addresses the “Open Source Air Traffic Tracking” Challenge. This challenge required the building of a tool that allowed users to select a particular flight and see its out-the-window or other views of the aircraft, and airspace. We decided to extend the scope of the project a bit. Our app was designed as a global sensor grid to measure the whole radio spectrum -thus making air traffic monitoring a subset of the solution. This free and community driven approach based on small and low-cost software defined radio devices earned the local team a global nomination for NASA’s People’s Choice Awards and will be competing to be among the final 15 out of 949 projects for global People’s Choice awards. And now you can vote for the Stuttgart Team as of 27 April.

Just visit this page and vote for our #BigWhoop app (once a day).

All this was possible because we started early. We had a kick-off event in February to give people the opportunity to meet, find a challenge to tackle and prepare it before the official Space Apps hackathon weekend during the 10th to 12th April. Having an early launch event was one of the results of our first Space Apps in 2012 and it worked out beautifully. A two day hackathon is great to pitch an idea, but we wanted to show a working project. From sensor nodes that can be deployed at hundreds of locations worldwide to the processed data ready to be analyzed on a map. It also made it possible to include interested people as virtual participants. Three BigWhoop team members come from Bolivia, Poland and the UK respectively and they already knew the goals of the project and provided essential parts to the project via Skype and GitHub. This already made our project feel global and important for everybody. You can still join BigWhoop, just get our code and start using it!

The hackathon was great to knit the team even tighter and add last minute additions. The support of random people at shackspace was also a big factor. People not even on the team overheard us discussing project details and simply joined ad-hoc and contributed their solution. This lead to the music arrangement you listen to during our video presentation and “node zero”, the very first node of our sensor grid now working on a virtual machine in shackspace’s experimental datacenter is not just producing data but also responsible to collect data from everyone contributing to the grid. 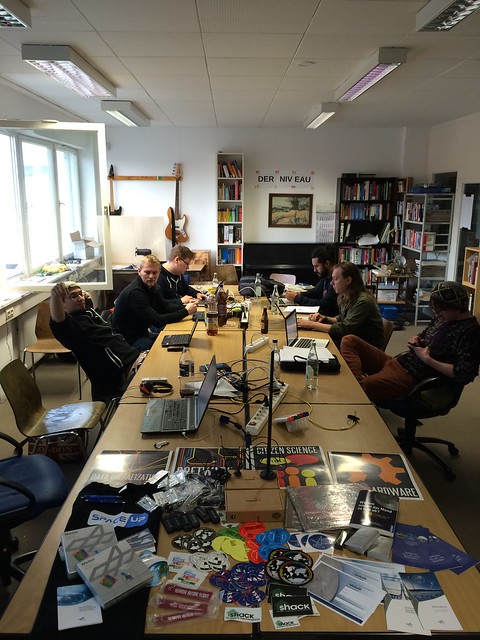 Ultimately BigWhoop is intended to run on the Constellation computation grid with 60,000 computers. However, we started a pre-alpha test. So we asked for your help during the hackathon weekend to plug in your software defined radio devices and start a sensor node for us. Our BigWhoop software was already able to send this to our server at shackspace and we received data from nice people in Virginia, US and Bremen, Germany. With this help, we were able to show you a first live demo at the end of the hackathon. Since then, we received further data and are really overwhelmed by everyone’s support and want to say a big THANK YOU!

As a team, we believe in BigWhoop and we will keep on working on it. One team member took a sensor device with him on a measurements campaign of his work and monitored the spectrum on his free time next to the Teide volcano on Tenerife. The scientific paper about the project was selected for the International Astronautical Congress 2015 in Jerusalem and we will present the Space Apps Challenge with “Opportunities of an open-source global sensor network monitoring the radio spectrum for the (new) space community” during the SPACE COMMUNICATIONS AND NAVIGATION SYMPOSIUM. And lastly, BigWhoop will serve as the ground station application for the Distributed Ground Station Network project also related to shackspace. There, it will help us tracking and communicating with small satellites globally and continuously and thus helping the satellite operators to get their positions and payload data faster than other systems.

Concludingly, BigWhoop and the NASA Space Apps Challenge was fun and a great experience. We learned so much during the event, we felt to be part of a global community, work(ed) on solving an important problem and started a project that can become even more than we can currently imagine. We as the local organizer and team will definitely apply for Space Apps Challenge 2016 again and bring it back to Stuttgart for you to tackle new challenges. We hope, that you like our BigWhoop project as much we do and give us your vote during the People’s Choice awards and make it win the space challenge! 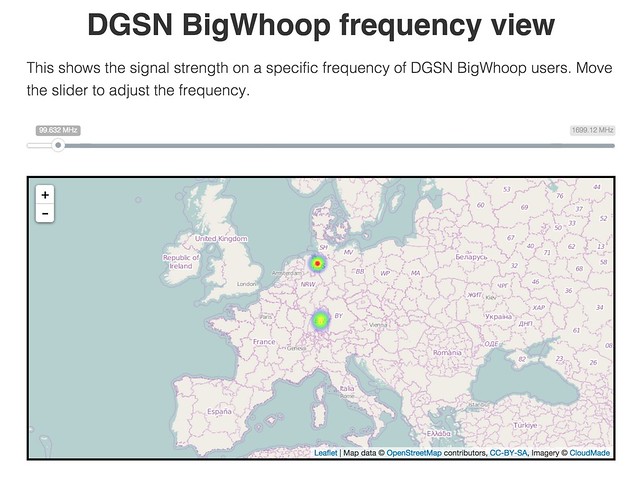 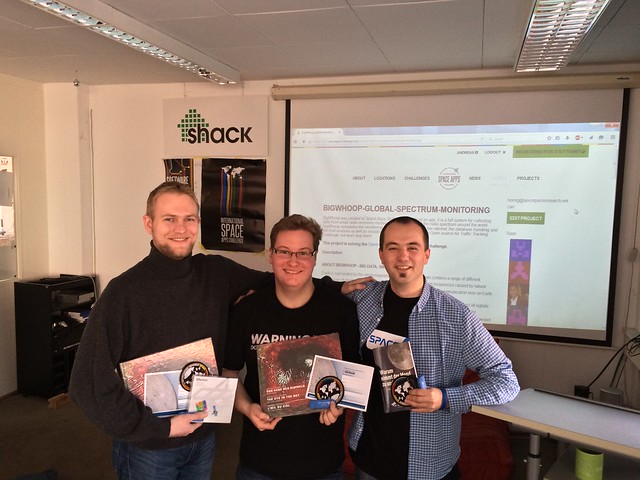 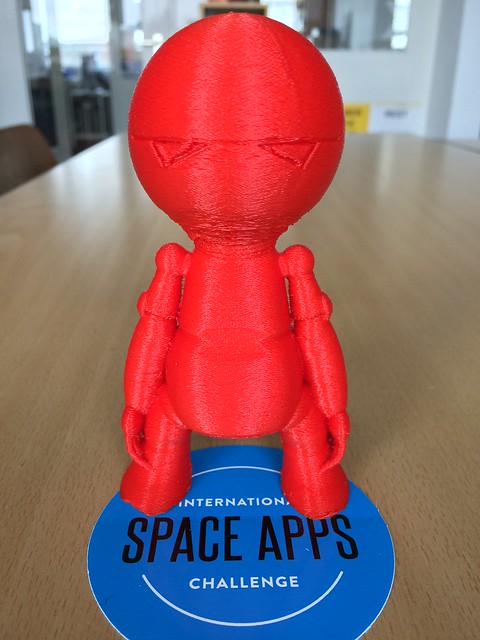 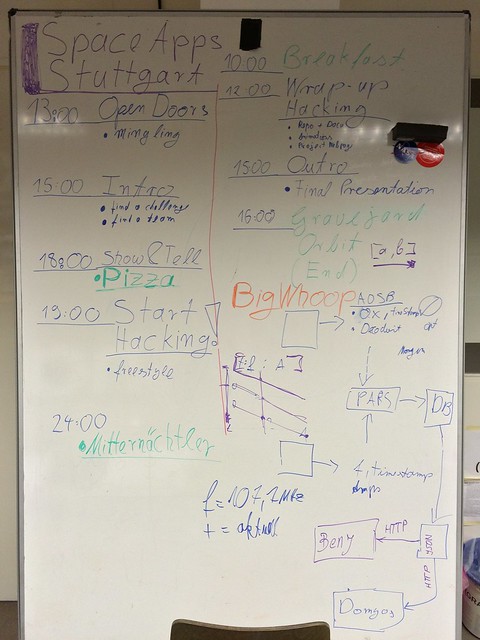